A Sort Of Human Statement Back stage at The Melba Spiegletent, there was free champagne and babes in abundance. It was the party to celebrate and mourn the end of Cherchez  la Femme. The poetess Gem and I were last minute ring ins to perform for the crowd as a couple of acts had pulled out. Should I even add that detail? Does it really matter how we got involved?  I wonder sometimes if there are some details that should be left out in the name of self branding. It would look better perhaps, if people knew I was booked in months on advance. Oh look at her! she is so in demand!  I was actually pleased to be asked to join in on the morning of the actual show. It meant I had little time to worry and cause stress acne. I had a friend’s birthday drinks in the afternoon. This meant that I would already be tipsy by the time I rocked up to the Spiegeltent at 7:30pm. A auspicious start to the proceedings.

It was great actually. There was a guy at the birthday drinks who thought it was cool and edgy to bait me about my passions and convictions (feminism and writing). ”I’m sorry.” I ended up saying. ”I am growing quite bored of this conversation.” And then went off to talk to someone else. He was a in real life troll. While at the birthday I drank a couple of gin and tonics. I was feeling pretty excited and attention hungry, by the time I arrived at my final destination for the evening. I had been asked to do a reading of some of my poetry or something. I chose something.  I chose to simply talk about a few things that annoyed me and a few things that any normal person would keep to themselves, for fear of ridicule or soul crushing embarrassment.

While backstage with Gem, we drank champagne from plastic flutes and talked and giggled and talked some more. She did her reading before mine and was so classy and beautiful I could barely stand it. Her reading of the Ann Sexton poem Ballad Of The Lonely Masturbator  made me blush a  little in recognition of myself within the lines and stanzas.

These are the poems from Gem’s readings can be read here and now. They are great poems. The kind of great that makes you not want to bother.

And then you do.

The Slaying by Linda Kunhardt

Once a week a nurse comes

to town to cut up a baklava.

The owner chooses a big one,

then the nurse hoists it.

She climbs up, poises a knife

and when the angle is right,

honey gushes out, and

The Ballad of the Lonely Masturbator by Anne Sexton

The end of the affair is always death.

out of the tribe of myself my breath

finds you gone. I horrify

those who stand by. I am fed.

Finger to finger, now she’s mine.

She’s not too far. She’s my encounter.

in the bower where you used to mount her.

You borrowed me on the flowered spread.

Take for instance this night, my love,

that every single couple puts together

with a joint overturning, beneath, above,

the abundant two on sponge and feather,

kneeling and pushing, head to head.

At night alone, I marry the bed.

I break out of my body this way,

an annoying miracle. Could I

put the dream market on display?

I am spread out. I crucify.

My little plum is what you said.

Then my black-eyed rival came.

The lady of water, rising on the beach,

a piano at her fingertips, shame

on her lips and a flute’s speech.

And I was the knock-kneed broom instead.

At night alone I marry the bed.

She took you the way a woman takes

a bargain dress off the rack

and I broke the way a stone breaks.

I give back your books and fishing tack.

Today’s paper says that you are wed.

The boys and girls are one tonight.

They unbutton blouses. They unzip flies.

They take off shoes. They turn off the light.

The glimmering creatures are full of lies.

They are eating each other. They are overfed.

<insert (desired/nerd) reference *in this space*>

#Pulp (from ‘Street Lites’, lyrics by Jarvis Cocker, B-side ‘Do You Remember the First Time’)

Meridel LeSueur on belief as action from “The Fetish of Being Outside,” New Masses [a communist literary weekly], February 1935:

“Belief is an action for the writer. The writer’s action is full belief, from which follows a complete birth…a creation of a new nucleus of a communal society in which at least the writer can act fully and not react equivocally. In a new and mature integrity.”

These are thy guests who bring

To gods with appetites grown great

Know that they dare defy

The words of law and priest—

(Better to let the unborn die

Than starve while others feast.)

The stricken flesh may be

Outraged, and heal; but mind

Pain-sharpened, may yet learn to see

That Life, avenging pain, will speak!)

See Meridel LeSueur on belief as action (1935 – above)

The poet closes with one of her own and it takes almost all of my restraint not to run away and refuse to follow on from such wonder.

There is a band called Face Face that plays after Gem and I hug her as soon as she gets off stage. We go get more champagne and then we dance to the band. We are the first to make use of the dance floor area. This wins us free t shirts.

I had been asked to send through a brief bio to be read out as my introduction. It was exactly one sentence long and mentioned none of my achievements over the past year.

So, when a proper intro that did mention my achievements, was read out I was surprised and astounded at my own awesomeness. This is a good feeling to have coursing through your brain and blood as you take a stage and invite an entire audience into the palm of your hand. The sound of applause helps as well. ”The bio I had sent through that morning.” I tell the crowd. ”Mentioned none of those amazing things. I had forgotten about every single one of them. The bio I had sent through had been. Jess Knight is a Melbourne based writer and proud scorpio girl.”

Im not sure what happens when I have a microphone in my hand and stage lights flooding all over me. It is nice. I like it. I like it alot. It is when I feel most powerful and in control. I talk about things that have been stuck in the recesses of my mind and can never be undone. The first hand job I ever gave was to the boy who I had crushed on since my first year of uni. I had thought he was so punk with his studded belt and those white singlets he wore. He introduced me to punk music. ”You might like this.” He had said, throwing a punk compilation on my lap. ”You’re a total weirdo.” He was not wrong. On the night he made the move, I was in his bed after a show. By ”first move” I mean taking my hand and placing it on his dick. The after math went all up the inside of my pajama sleeve. My Tweety Bird pyjamas. My grandmother had bought me those and now there was cum all up and in them. The guy did not even kiss me. I remember agonizing over that detail for months. ”All the punk boys I knew let me down.” I say. ”Because of one detail; they all went to private schools or all boy boarding schools. They grew up in the suburbs.”

I was drunk and I know this now because I have a memory of doing a faux sexy shimmy for the crown and saying how adorable i am. Ever seen a girl with metal rods in her spine try to shimmy? You missed something great and awful and weird all at once. When I came off the stage, there was applause and a few whistles and cheers. Gem hugged me and I swear I really think that if I got a hug and  positive affirmations from her every time I performed, I would make funny and play the fool every day.

Someone should create a comic based on us two adorkable creatures. We could have adventures around the world and solve poetic crimes committed by the white cis gendered male poets. ”You are not Ginsburg!” we could shout and then clobber the offending man over the head with word weapons and mind tricks.

You were meant to come as your favourite feminist. I had finished the book about Frida Kahlo that I got for my birthday. That was the basis of my decision to take my inspiration from her short and eventful life story. Frida was most enamoured by her own existence and being aware of her own inner world and the word that existed around her. We even had similar spinal surgery. We both had bone removed from our hip in order to fuse our spines from getting any more twisted. Her surgery wound from that particular procedure, got infected.  She was never ever anybody but herself and not sorry. That is why I went to the party and was simply myself. I invoked the spirit of my honorary art sister. I was myself and the flawed feminist that is always trying to do better, read more widely and battle the nasty inner thoughts that still plague me due to internalized mormon indoctrination. It is so insidious the thoughts that burst inside of me that are not from the person I am, but from the person I was. I am trying to replace her, it is a slow and long winded process. 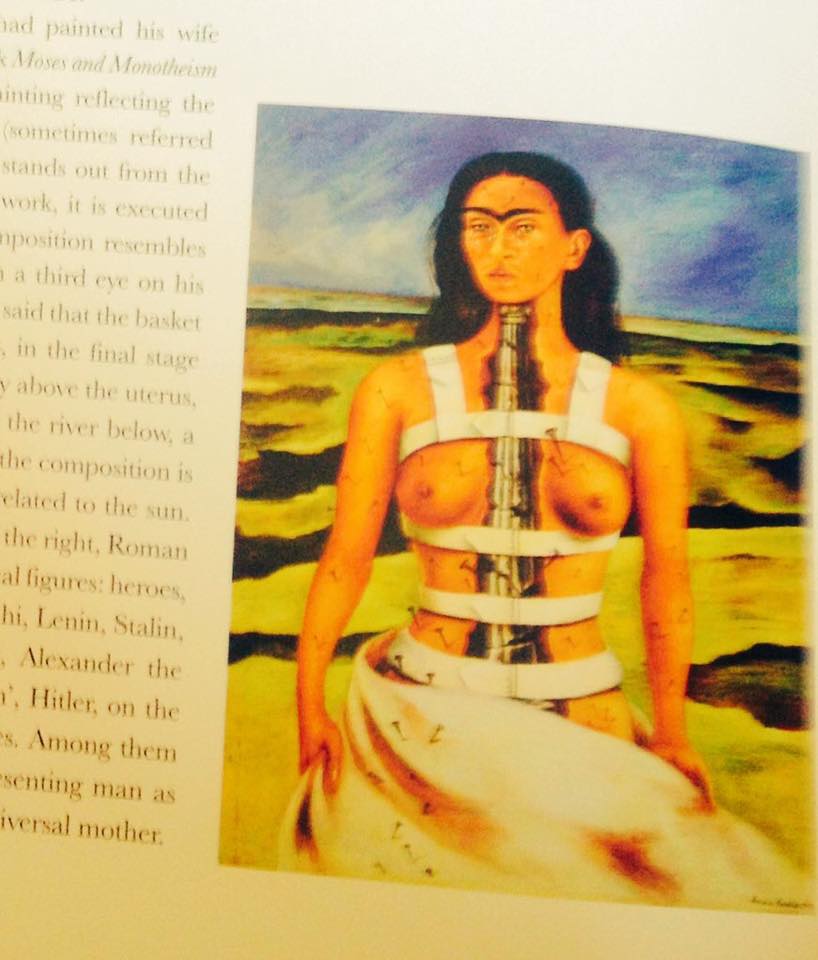 I want a print of this framed and on my wall. I love this painting of hers that she did 1944, Broken Columns would have been a good source of comfort and revelation to 11 year old me. Oh I had a back brace just like hers. I did not have the breasts or the unwavering stare. I wanted to disappear. I wanted to be air. It would be awkward to try and dress up as Frida Kahlo. The cultural appropriation that would be involved would be grotesque in the levels of racial insensitivity. Especially as she was such a strong nationalist.When you have a body like mine, it is difficult to picture yourself – even in fun – as anybody else but you.